Have you seen the episode of Doctor Who called Gridlock? Here’s a quick summary from imdb.com, “In the episode, alien time traveller the Doctor takes his new companion Martha Jones to New New York in the far future, where they discover the remainder of humanity on the planet live in perpetual gridlock within the Motorway, an underground highway system.” The thing is, the folks stuck in the traffic jam don’t know that there is no way out. No exits or off ramps. The only time the cars move is when someone’s vehicle gets devoured by the giant monsters that live in the HOV lane. Everyone just keeps going along, full of faith that if they are patient they will get to the promised land beyond the highway.

Let me present the current day, Halloween version of Gridlock: 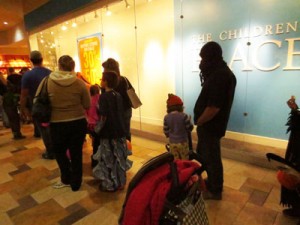 In this story, the citizens of the region crowd into the mall for an attempt at Trick o’ Treating when Halloween night is plagued with really cold rain. Everyone enters into the queue that wraps around the entire mall and waits patiently while the line plods along past store-after-store with signs saying, “Sorry, out of candy!”

I find myself wondering, what if we are all full of faith that the elusive “Store with Candy” is just around the next bend, and we’ll just keep going and going and going, walking around and around the mall, not really noticing we’ve passed the same store three times because all the stores look the same, and we won’t leave because surely if there was no candy left anywhere in the mall, the line would break up and the people in front of us would go home, right? 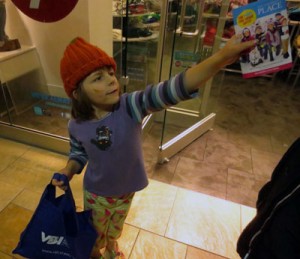