Does it appear to anyone else that I merely photoshopped a yellow diaper that weird green color? I promise I did not. I took this photo yesterday. 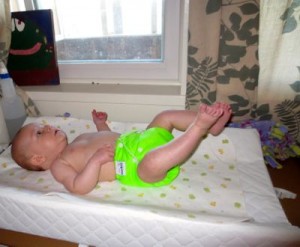 – Quit his day job at the school, so he can spend more time with his Auntie M.,
– Finally experienced the joy that is nakey-butt time (it’s been too cold!),
– During said time in the aforementioned item, rolled over with a little bit of assistance,
– Went on his first road trip to visit his Grandparents down South, 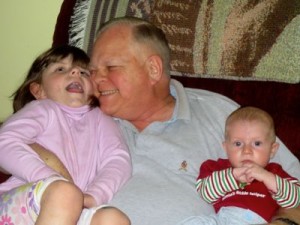 – Stayed in a hotel for the first time, 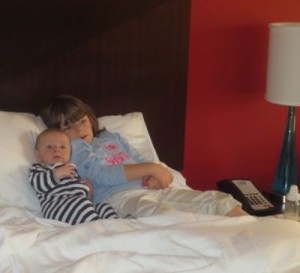 – Made Grandma laugh so hard she almost peed her pants due to his insane chortling when she zerberted his feet,
– Talks…a lot, drools…a lot, and giggles…a lot…especially when you tickle (or zerbert) him,
– Had his first yoga lesson,
– Rode in his snazy stroller, 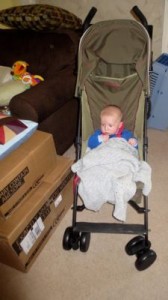 – Continued the tradition of being photographed with stuff on his head, 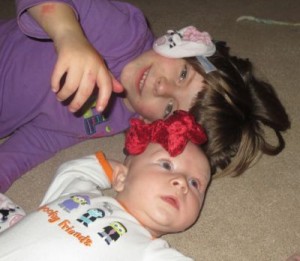 – Got his first cold, gained half a pound, and outgrew some of his 3-6 month clothes and the first level of his bed,
– Slept through the night a few times,
– Went to his first grown-up party, 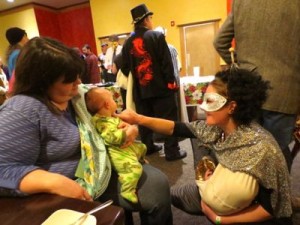 – Discovered those things at the end of his legs are FUN,
– Finally got his Superman outfit back from the tailor (where is that picture??)
– Tried to pull my cheek off my face with his superhuman strength (see above), and
– Got Mama a little payback by twisting his fingers into Anya’s hair and pulling! 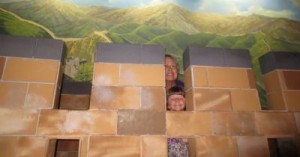 said “something” a lot less when reading, flew a helicopter, 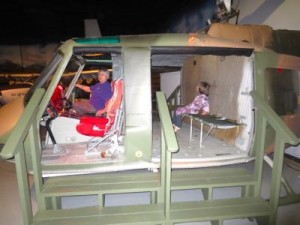 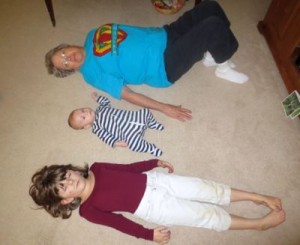 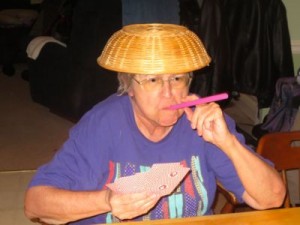 and added to her vocabulary great sayings and words like: “What the huh?,” “Sheeeeeesh,” “Uh—yuh!,” and “Morlon” (as in Mama, you are a morlon!).

Carol knitted half a sock, stared longingly at craft books (and really books in general), tried to do some scrapbooking at home when she wasn’t able to make a crop and realized it just wasn’t much fun alone, and was reunited with her Little People toys. 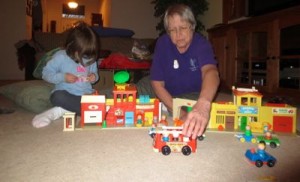 Andy got a hair cut, watched the baby alone for three whole hours, and went to a LOT of meetings.