When we last saw our heroes, they were bravely…sleeping.

On our last full day in DC, we awoke and set off in search of food. (I will now take a moment to reflect on how, in such a big city, there are surprisingly few restaurants open on weekend mornings.) We decided to head in the direction of our target, the Museum of Fine Art, and hope that we would stumble across some place to eat. During our travels, we saw and heard our first real-live DC protesters marching along, “Hey! Obama! We don’t need your *mumblemumblemumblesomethingthatrhymeswithobama!”

We ended up in an ORGANIC bistroy-chain-type place. Everything was ORGANIC. The staff wore shirts that said ORGANIC. The menu couldn’t just say, “Everything here is organic.” No, it had to list that the ORGANIC french toast was made from ORGANIC bread made from ORGANIC grains and the syrup was ORGANIC and the water was ORGANIC and the tables and the silverware and the lights and the doorknobs were ORGANIC. The food was good, but the tables were crammed in too closely and as we left, my big ORGANIC butt nearly took out the ORGANIC beverages of our neighboring ORGANIC diners. HA.

Now it is time for a random geeky reference: Look! We found the Tree of Gondor! 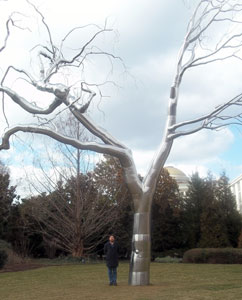 We made it to the museum, and the first five minutes were good, but I really should have taken it as a sign we should turn around and leave when I set off an alarm and Andy got reprimanded by a guard (two separate incidents) all before we’d left the first exhibit.

That first exhibit had fancy, old furniture. I was hoping I’d find some items decorated with quilling, but when I saw the embroidered fire screen, I figured that was interesting enough for closer inspection. I leeeeeeeeeeeeeeeaned towards the screen to check out the stitching close up and then BEEEEEEEP BEEEEEEEEEEP BEEEEEEEEEEEEEP! I jumped back and when no one tackled me to the ground I figured I would survive and quickly moved away from the motion sensor guarding the embroidery. I met back up with Andy and Anya just as Andy was putting Anya up on his shoulders so she could peer into a fancy, old game table (checkers AND backgammon!). A guard boomed, “You can’t do that.” Andy put Anya down and there was much, “I’m sorry! She’s short!” The guard glared (he’d probably seen/heard me set off the alarm), and we raced out.

We behaved for a while and looked at all sorts of neat paintings and sculptures and whatnots from olden days. Anya really liked the Degas ballerina sculptures. I really liked the super old books. I’m not sure what Andy really liked, but I’m guessing the naked lady statues. After wandering the mazey building for a while, Anya and I crashed on a couch and waited for Andy to finish exploring. That’s when things really started to get bad. The kid entered meltdown mode.

[In this photo, Anya had not yet melted. I don’t like taking photos in art museums, but in this central atrium place it seemed okay. I do like photos in my posts.] 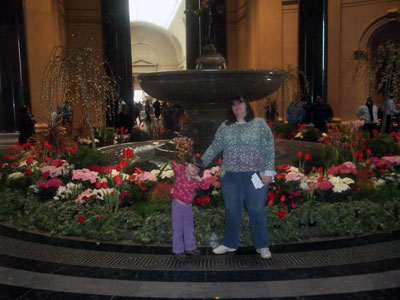 There are few places actually good for a five-year-old to have a meltdown. The middle of an art museum is definitely not one of them. I had no idea where Andy was, I couldn’t leave the building because we’d checked our coats and Andy had the tickets, people were glaring, the guard was staring, and I was about to scream. I picked up the very unhappy kid and tried to figure out how to get out. (Did I mention the building was a maze?) We made it back to the lobby, I texted Andy “HELP. COME NOW” and I tried to contain the beast until Andy arrived. Thankfully, I didn’t set off any alarms, no guards boomed at me, and Andy arrived before I went to find out if the coat check room took kids.

Andy had been looking forward to this museum the whole trip, and we waited until the last day because a new exhibition was opening that he wanted to see. So, I let him stay and finish up while the kid and I headed back to the hotel. I think she screamed for 15 minutes. I don’t really remember what happened after we got back to the hotel, but I am pretty sure it involved jellybeans and a nap.

[Here’s some art from the hotel. I’m putting the picture here because I thought this post needed more pictures, and I was just talking about art and the hotel. Doesn’t this look like someone slapped a bunch of scrapbook paper on a canvas and framed it?] 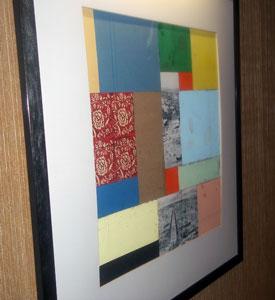 Naps make everything better. Dinner is good, too. We decided to try an Italian place near the hotel. The hotel people had said it was “somewhat” child friendly. When we walked in with a kid, I think the staff tried to use their collective mind power to get us to leave. But then the girl with the blue hair and a cow costume came in, and the staff had to divert their super powers…leaving us to have our dinner in psychic peace.

We decided to take the metro to our last museum of the trip, and as we zipped along in warmth and relative comfort I found myself wondering, “WHY haven’t we been taking the metro the whole time???” Alas, our destination was a sad one because the Air and Space Museum was not among those open late on weekends. We peered through the windows a bit and then, after promising Anya we’d see it first the next time we visited DC, we marched back across the mall to the Natural History Museum, which was still open.

We only had about an hour, and we spent it in the history of humans area. Anya was fascinated with ancient humans, and we stayed until we heard that boomy voice all security guards must have as a prerequisite for employment: “CLOSING TIME!” Before we left, though, we did manage to get pictures made of what we’d look like if we had been early humans. 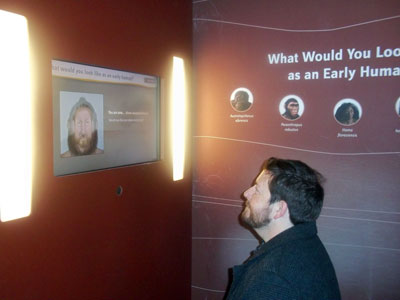 It was all downhill from there. Eating cold leftovers in the hotel room, folding dirty laundry so it would fit in the luggage, stashing the fancy schmancy soap and lotion in our high tech cosmetic case — the ziplock bag. Sleeping, waking, metro to Union Station, back on the bus, back home, barfing in the grocery store, barfing in the car, and, of course, a nap.

One thought on “Visiting the Big City – Part 3”