It only took me seven years, but I finally did it. I knit a sock! (I can’t knit the other until I get home because I left the other ball of yarn there. Oops.) 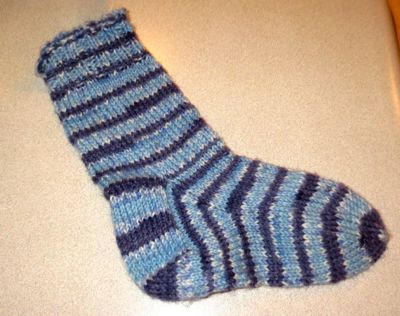 I bought the yarn seven years ago during a bad day at work. I escaped to the yarn store for an extended lunch break. I’m not sure how many times I started the sock before it began to look like a sock, but it was many. Unfortunately, my measurements were quite a bit off, and I was ending up with a sock that would fit Andre the Giant. I ripped it back and began again. Things were going well until it all screeched to a halt when a cat munched one of my needles. The yarn languished in the craft cabinet until last Christmas. My parents gave me an awesome set of nickel-plated dpn needles.

Since last December, I have been through several more versions of the sock. One fell off the needles and unraveled in my purse; one switched from knit to purl right in the middle of the leg for a few rows for no good reason; one had a gauge change mid-sock and made me rip it all the way back.

Finally, finally, I seem to have this sock thing figured out. 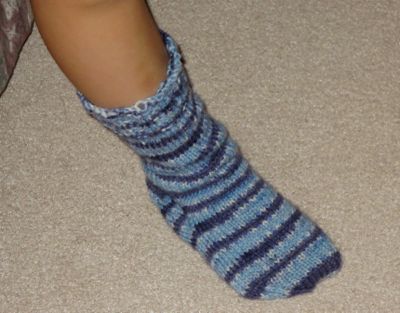