Shortly after we adopted Big Kitty (at that time called just “Kitty”), we decided it would be a very good idea to get another cat. Kitty really need a friend to help keep him out of trouble. Since Kitty was still a teeny kitten himself, we thought it would be nice to get another teeny kitten. That’s when we found Lightning, which is what she was called when we found her. (She was in a little cage with Thunder, of course.) Andy liked her name, so we kept it, but I couldn’t spell it and thought it was silly, so I started calling our pair Big Kitty and Little Kitty.

BK and LK were a great team, and having another cat around did help BK stay out of trouble. Of course, there was then LK to get into trouble. Because they were both black, it was a bit hard to tell who was who. There were a few ways to tell them apart, though. Little Kitty purred pretty much if you looked at her (at least back in those days). Big Kitty was…well…bigger. Their eyes were also different. Little Kitty’s gaze, to me at least, always seemed much more intense. And, well, yes, we gave them different colored collars! 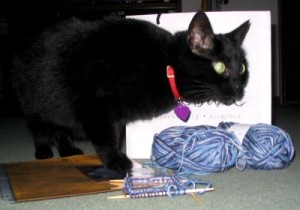 The two Kitties weren’t a pair for long, though. Over the next two or three years we added several more cats to the family. Bob was fine, but TreeFrog wanted to be boss and tried to dominate Little Kitty–who would have none of that. Then we brought Buddy home, and TreeFrog bribed him with extra kibble or something, and Buddy started beating on Little Kitty. During one fight, I tried to break things up, and Buddy chomped my hand. (That’s when I learned, the hard way, how bad a cat bite can get.) During another fight, Buddy somehow sliced Little Kitty’s tail and pulled a tendon out. [That was actually a sort of funny story. One day I was petting LK, and I found a piece of string hanging off her tail. Actually, it looked more like dental floss. I couldn’t figure out how she’d got that caught on her tail, and I couldn’t really see where it was stuck. I called Andy in, and he couldn’t figure it out either. It sort of looked like the string/floss had gotten tangled on and cut her tail a bit. I trimmed the end of the string with nailclippers so it wouldn’t get caught on anything, and we took her to the animal urgent care. The vet was as perplexed as we were for just a moment, then he announced that the string was really a tendon that had been pulled out of Little Kitty’s tail. I freaked out a bit until the vet assured me that the tendon I’d snipped off was toast and he wouldn’t have been able to fix it anyhow. It must not have been a very important bit because her tail never looked funny or floppy. (I would like to add that Little Kitty did get her fair share of punches in. I found wounds on Buddy several times, too.)]

For the next few years, Little Kitty hid most of the time. She lived on the china cabinet for a year, coming down only to go potty. Eventually, she traded that place in and moved under our bed. Sometimes she lived in the bed, crawling into the box spring through a hole she’d shredded in it. We’d put little bowls of food and water out for her wherever she decided to be, and sometimes we’d hear her purring and know she was okay. Andy and I were both pretty sad about this, but we didn’t really know what else to do. I suppose we could have found her a new home, but she was our Little Kitty, and we were family.

When we moved out to the boonies, things started to look up for LK. Buddy became an outside cat during the day. Little Kitty was free and we saw her more than we had in years. She was still a loner and preferred to stay to herself, and she’d run off and hide at night when Buddy came in. They still had fights but nothing like before. And then a few years ago, Buddy died, and Little Kitty was home free. She was still pretty quiet and reclusive, but we did get to see her more.

Little Kitty always had a pretty sensitive stomach. When she was a young adult kitty, she started barfing everything she’d eat. I took her to the vet, and they did x-rays, and the vet found a mass. I was all freaked thinking she had a tumor, but when they did surgery, they found out it was a really hard piece of poo. Ha. Still, after that surgery we had to feed her and give her water with a syringe for a while because she was so weak and wouldn’t eat or drink on her own. I remember sleeping on the floor next to her on a sleeping bag, waking up every few hours to give her some more. When I had to go to work, she stayed with a friend who did feedings for me. Little Kitty healed well, but after that she’d every now and then have troubles with food. We had to make sure not to change food much because we never knew if she’d be okay with it.

As she got older, her eating got worse and she started to fade. For the last few months we fed her canned food only…and it had to be on a clean plate…and the spoon used to scoop the food could not have touched any other cat food…and no other cat could have touched her food. There was a bit of a ritual to it, but we did what we had to to try and get her to eat. For a while all she’d eat was tuna fish. Over time, she ate less and less, and she was skin and bones. We made an appointment to put her to sleep back in April, but she still had that glimmer in her eyes and she started to eat more, and so we held off. One day about a week and a half ago, she started eating like crazy. I’d feed her and she’d lick the plate clean and meow for more. She went from eating maybe 3/4 of a can of food to at least 2 in a day. This went on for a few days when we decided a vet check was in order. Something weird was definitely going on. The morning of the appointment, she stopped eating. She wouldn’t touch any food. That afternoon, the vet confirmed that the end was here, and I took Little Kitty home so we could all have a chance to say goodbye.

About a week after we adopted Little Kitty, she got a cold. I remember her tiny little body curled up on our big, giant bed…snot bubbling out of her nose. She was so, so small. The last night Little Kitty and I spent together, she was that teeny, sick kitten again. I slept on the couch, holding her for most of the night until she seemed to slip into unconsciousness. I made her a little bed on the floor and talked to her and in the morning she was gone. 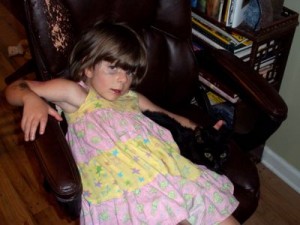