The other day when Andy had to stop the car suddenly, Anya blurted out “Sweet cheeses!” At least that is what I am telling myself she said. Another one of her favorite exclamations? “What the hex!” We are definitely doing a great job making sure our kid has a colorful vocabulary.

Last week, the kid had winter break, so she and I packed our clothes, toothbrushes, legos, dollies, and various crafts and drove to Georgia. We did all the usual things one does when on winter break. We drew monster eggs on the porch and waited for them to hatch. We planted and watered acorns in the flower boxes. We made chalk outlines of each other and then washed them away. 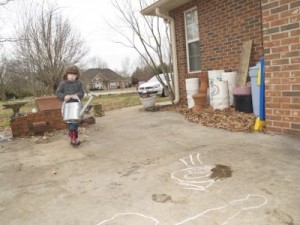 We went to Michael’s four or five times, bought little wooden birdhouses, and did a little painting. Anya’s first birdhouse (of 3, they were only a dollar!) was done up in bright, happy colors. After that, I can only figure that she decided birds were goth or emo or something, so she gleefully mixed all the colors we had into a big gray mess. I have to admit her coverage on those last two houses was impressive. Nary a bit of wood showed through the thunderstorm-colored paint. 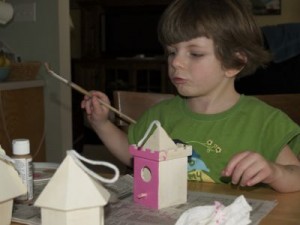 I re-started my afghan. Anya was very excited when the afghan was big enough for her. It still seemed too small to me, so I plodded on. I really should have stopped. More on that another day.

We helped Gramma with the afghan she’s been working on for about a year now. It’s Anya’s rainbow blanket! We bought the yarn around Christmas of 2010, and Gramma’s been crocheting squares ever since. I was supposed to help with this project, but my squares weren’t. Christmas of 2011, we figured out we needed more squares, so Gramma bought more yarn and crocheted more and then POOF! Now all that’s left is to sew all the squares together. I’d help ya, Ma, I really would, but, um, I have 150 fair items to finish. Sorry! 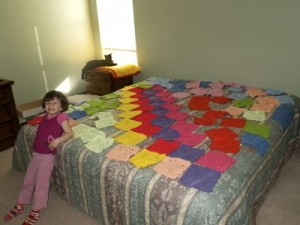 The highlight of the trip? Mulch! I love mulch. It’s all smooshy and weed killy. One afternoon my mom noticed the neighbors were having some trees taken down, so she did what she does (talk to people!) and by the end of the day, she had three newly trimmed trees and a giant pile of mulch in her yard. I like to put down mulch. It’s sort of like mowing the lawn or vacuuming. Quick, visible change. Anya wanted to help me out (because I forced her to stay outside). She clambered up the pile and quickly declared herself, “KING OF THE MULCH!” 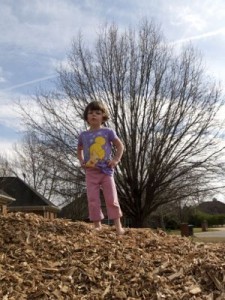 To wrap up the break, I got food poisoning or a stomach bug and spent a day moaning and whining and barfing. Sorry, I didn’t take any photos.