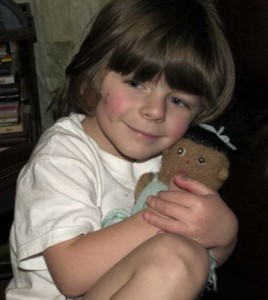 When I was at our local yarn store, The Woolly Jumper, buying expensive yarn for 108 | Needlework | Knitting | Infant’s Set, Anya saw a kit for a knitted, felted dollie (Knitted Felted Kuku Doll – “Ella”) The kits were put together very cutely, and displayed way down low where little hands could easily pick them up. Anya had to have one. She picked her favorite one up and carried it around the store. When I told her we were just there for some yarn, she was heartbroken. And determined. While I was chatting with the yarn lady and another customer, Anya clutched the doll kit to her chest and raced for the door. After explaining how we don’t take things from a store without buying them because that is wrong and is called stealing and yes the police will give you a ticket, I said that thing parents often say in December when their kid wants something the parent isn’t going to buy: Maybe Santa will bring it for Christmas. Well, Santa must have heard because the dolly showed up under the tree at Christmas. (I’d like to have a word with Santa about that because while it was a gift for Anya, it was a project for me. Shouldn’t Santa have made up the kit before delivering it??)

The doll knit up quickly, but I hit a snag. About one third through the second arm, I ran out of yarn. I was visiting my parents in Georgia, so I couldn’t just dash over to The Woolly Jumper. I googled yarn shops in the area and found one, but it was closed that day. (Why had I never thought to look for a yarn store there before??) I tried finding a match at Michael’s (HAHA). I thought about giving Anya a doll with only one arm, but she already has one of those, and it seems to make her a bit sad. So, I did what Andy would do, and I wrote a forlorn email to the Dolly Mamas (who made the kit). They wrote back right away, asked for my address, and put some more yarn in the mail. They even offered to send it super-fast-mail, but I told them not to worry about that.

I finished up the knitting and prepped the doll for felting, but then Anya saw her and grabbed her and ran off shouting, “DOLLY!” For a while, I wondered if Anya would let me felt her. She finally did this weekend. The felting went quickly, and after the doll dried (wet wool smells far too much like cat poo), I needle felted a face, and now the doll is done. 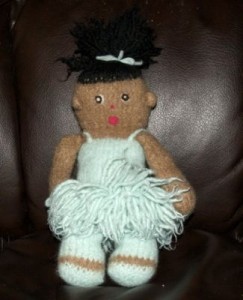 I already posted this picture, but I forgot to say that it was a Fair item. 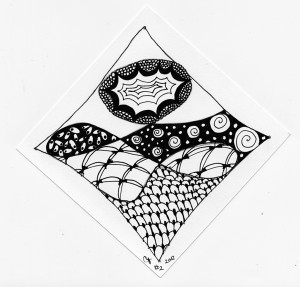