I made a pendant for #146 using a kit I bought at the scrapbook convention I went to a few weeks ago with some of my Crafty Buddies. I really want to say the piece is done and check the box on my list, but I have to find a chain or ribbon on something to hang it on. Bother. Still, it was easy to make, inexpensive (I’d already bought the kit), and pretty enough for a gift.

The work on #114 continues. I got very frustrated with a knot today, grabbed the scissors, and hacked a dozen or so stitches out. I must admit, though, that I am finding something satisfying about filling in the little squares. I finished a large leaf this afternoon, and I felt the same sense of accomplishment I get when I hear those little “pingpingpings” of dirt being sucked up when I’m vacuuming. I miss vacuuming. Sure, I could vacuum the wood floors, but it’s not the same. I could also vacuum our couch, but the couch scares me. Stink bugs live under the cushions. And other things…things that hunt stinkbugs…or that stinkbugs hunt. I’ll sit on the couch, but I will only vacuum it when people come to visit. Maybe. If I really, really, really like the people. And I can’t figure out a way to get Andy to do the vacuuming.

Worker guys are finishing putting in some new playground equipment at Anya’s school. I mention this because I found a picture of her playing on the climby-spiral-stumpy thing. 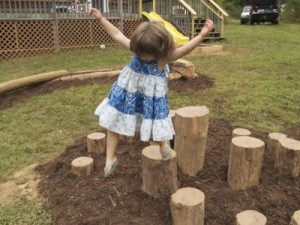 One thought on “I miss vacuuming”