In high school, I had these two friends, Bernadette and Cathy. Both had dark hair, played the clarinet, and were seniors. One day I was talking to someone, and I couldn’t remember if Bernadette or Cathy was the topic of my story. I said, “I can never tell those two apart. They are so much alike.” The person I was talking to said, “Cathy who?”

Turns out I had made up Cathy. She never existed. There was just Bernadette. As it happens, there is no evil cousin of the boss stitch, either (that I know of). There is a couched stitch and there is another stitch that is perhaps a distant step cousin three times removed, but even if I combined those two, I still wouldn’t have the second evil stitch I whined about. I did try, though. After all that agony, I decided to keep the pattern even though it is just as made up as Cathy.

But I am done.

A needle so sharp a diabetic could use it to check blood sugar and a pair of reading glasses later, and I was able to complete my third fair project.

For your viewing pleasure, here are all three. I decided secrecy about my entries wasn’t very much fun. Please note the button craft needs a pretty vase and some arranging. 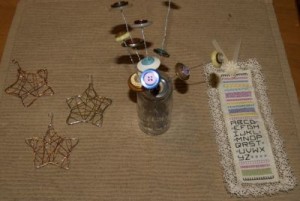