For the first time in two years, Anya and I have been at home when it snowed enough to be fun. Fun is, of course, relative, and probably the folks stuck in their cars in ditches or dealing with power outages at home had different feelings about the recent weather. But, that wasn’t us. Yay! Fun! 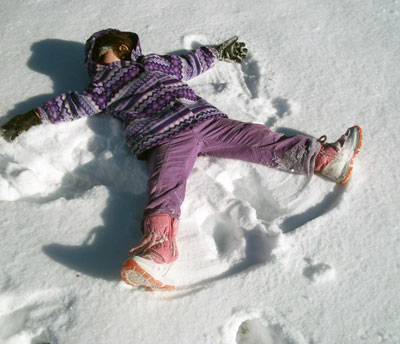 We did get kicked out of school early on Thursday (we don’t have school on Fridays), and poor Andy had to work at home for the bits when his job wasn’t closed. So, we were all home for several days in a row. We enjoyed the snow…. 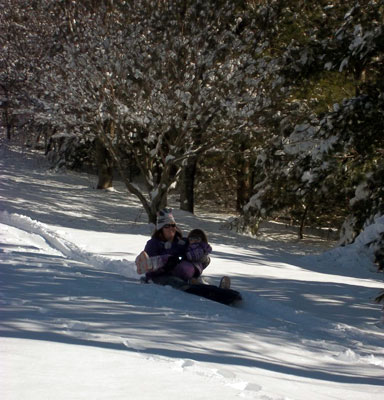 …we enjoyed the snow again… 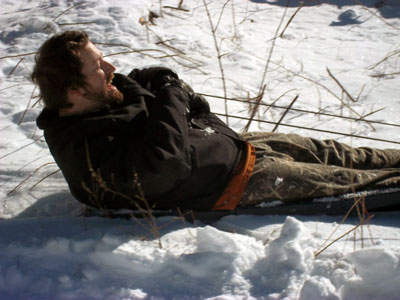 …we watched the dog enjoy the snow… 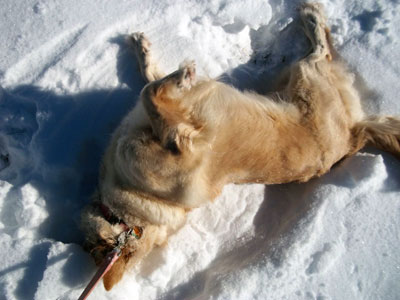 …we played games (dominoes, Sorry!, Monopoly, Settlers of Catan — this kid is a game nut)… 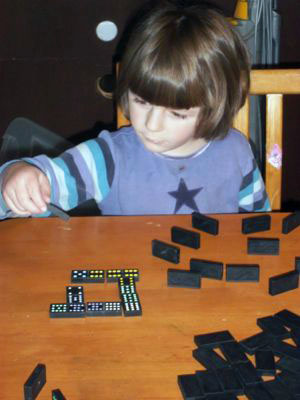 …and eventually we all went a bit crazy and AIEIEIE GET US OUT OF THIS HOUSE.

Today Anya and I went hiking for four hours or so. We went to the Bottom Creek Gorge nature preserve (about 10-15 minutes from the house). It has three trails, and we walked two of them and saw the second highest waterfall in Virginia! Apparently on the trail we didn’t go on there are the remains of some cabins for folks who used to live up there, and we met someone at the waterfall viewing area whose “father’s people came from there.” We’ll have to go back and bring Cabol with us next time. 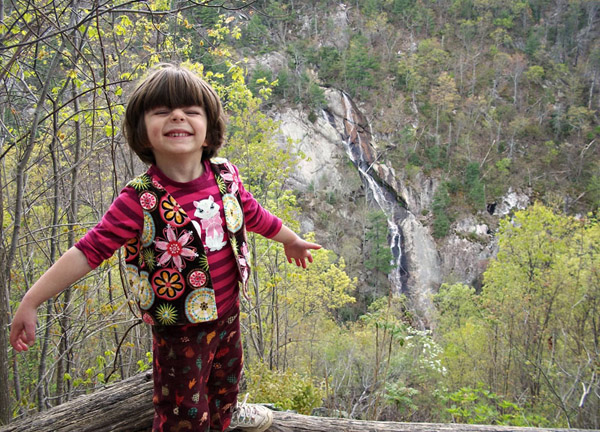 According to the trail map we went about 3.5 miles, ranging from 2200-2600′ elevations. Anya did incredibly well, leading the way for most of the trip to the falls and part of the way back, at least until we started to run out of energy. I was impressed at her rock climbing abilities, since I have all the agility of a wounded rhino.

Carol and Anya have gone to Georgia for a week, so it’s a mini-vacation for me.  Except that I still have to work.

Progress continues on the studio space.  I’ve wired all but the back wall, and since I can’t get to the back wall right now, it will have to wait until I work my way back.  But now we (I) can insulate and put paneling up on the rest of the walls.  I broke three mason jars while moving things around.  Fortunately we (Cabol) have approximately three billion.

We started getting milk again! Tonight I started cultures for yogurt and buttermilk. I can finally use my Christmas yogurt maker! I hope the living room is warm enough for the buttermilk to set. And that the cats don’t try to eat it.  Maybe I can use Anya’s room as an incubator. If only I knew where my thermometer went.

Surplus auction this weekend, they have some oak cabinets and a large wooden table, I’m hoping they go cheap.  Maybe I’ll come home with a file cabinet too. And a giant band saw.

I felt an urge to try making lard recently, so I picked up some pork fat from Bright Farm and gave it a whirl. They suggested using a crockpot to render it rather than a stove, and it worked pretty well. 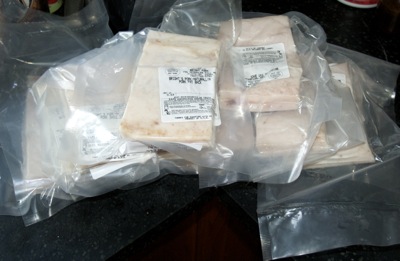 The packages of fat. 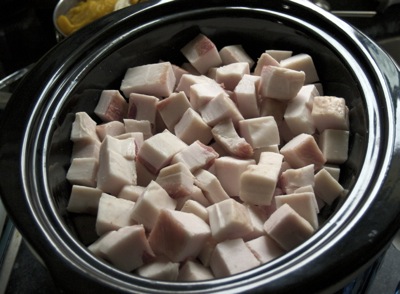 Chopped up and in the crockpot. 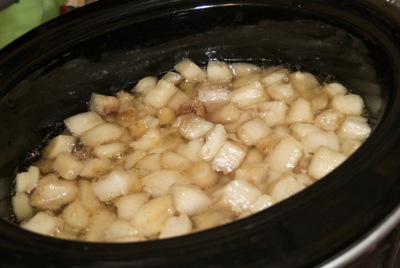 After a few hours. 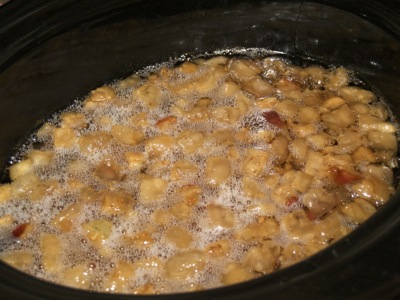 After about 12 hours or so, it looked like the solid bits were brown enough. 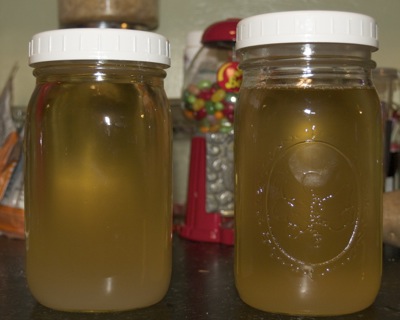 About 5 pounds of fat turned into 2 quarts of lard… 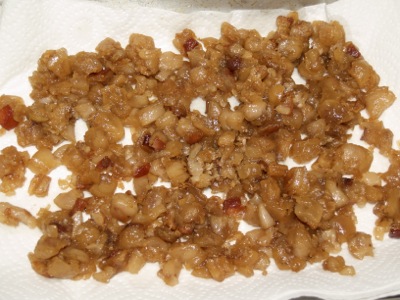 …and a bag of crunchy bits. Although I think I’d fry them before using to make them crispy again. 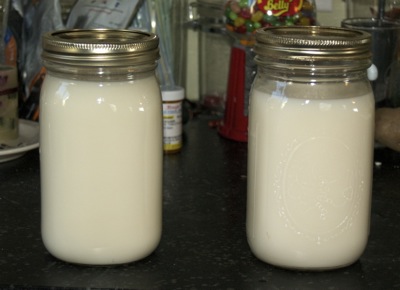 I put one jar in the fridge, and one in the freezer. Today I made biscuits with some, and they are definitely flakier than in the past. The pork taste was only a bit noticeable, and then only if nothing was on the biscuit.

I wonder if there is a lard category at the fair.

Saturday we put our new cidermaking tools into action. 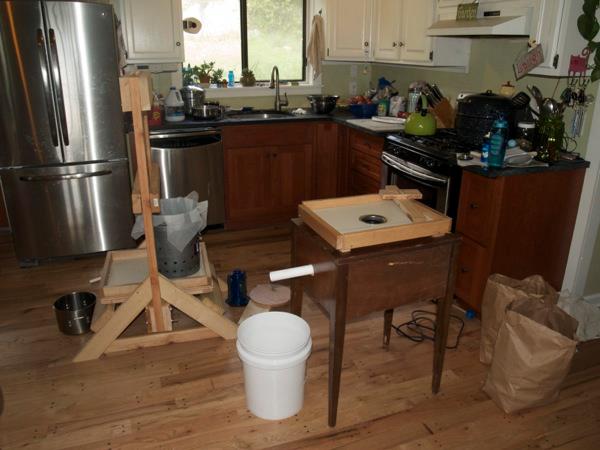 I was in charge of the mashing and pressing, and I made Cabol do all the cutting. Anya helped with the washing. And the mashing. 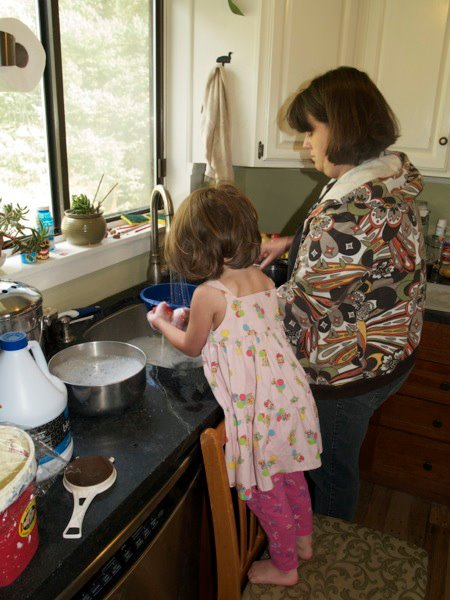 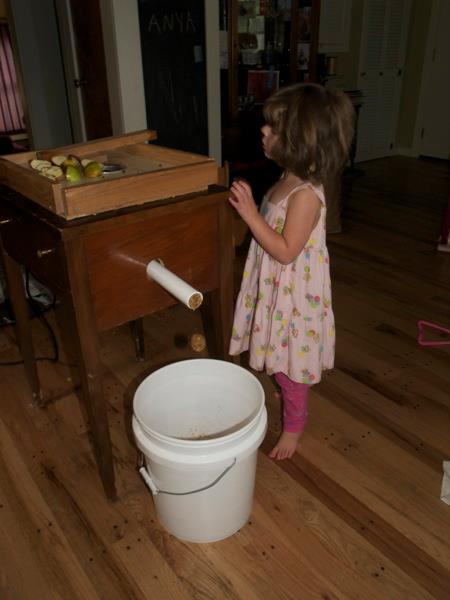 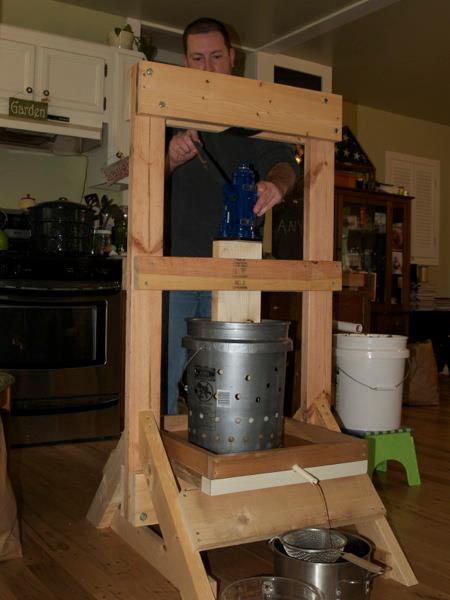 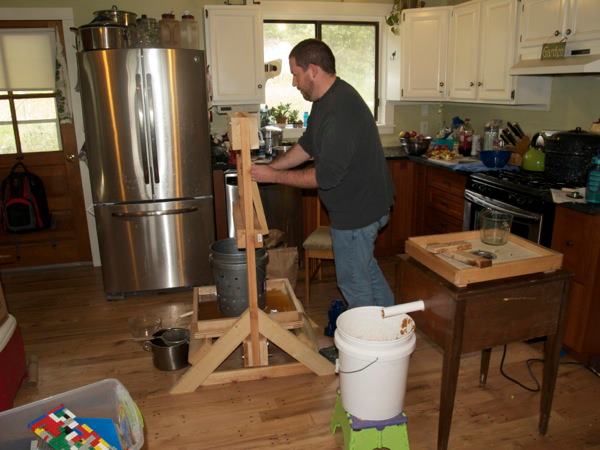 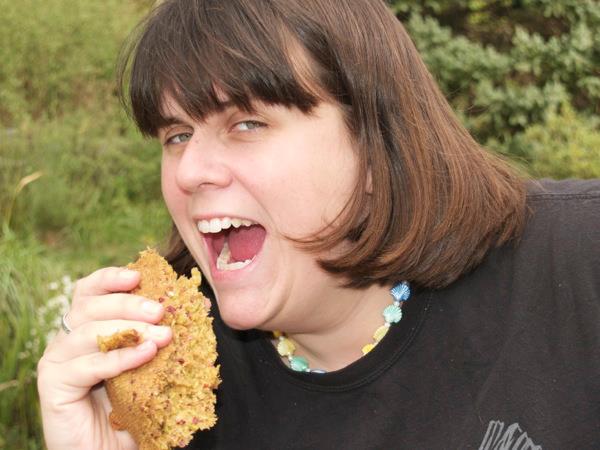 All told, we ended up with around nine and a half gallons of cider. Five gallons went into the fermenter, and the rest in the fridge and freezer. 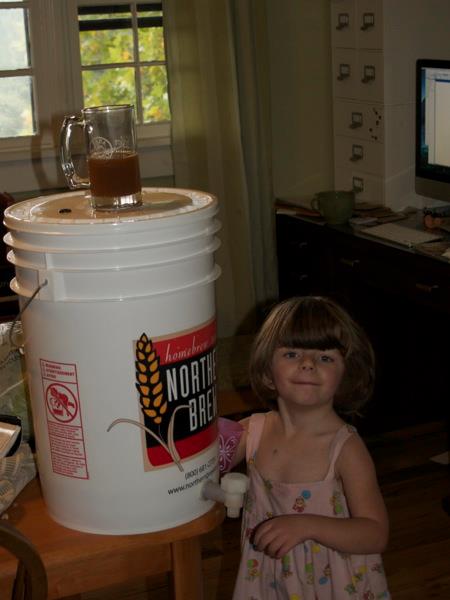 While not as exciting looking as the cider press, I finished the crusher today. 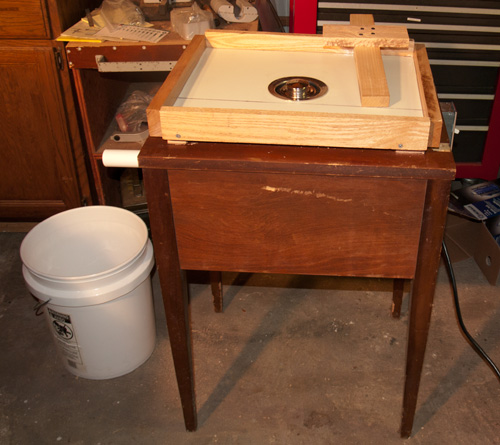 Hidden where the sewing machine used to be is a new garbage disposal to grind the apples into mush.

The last few days I worked on building a cider press up in the workshop, mostly from things we already had laying around. I tested it today, and it seems to work. At least, it pressed a bag of sawdust – until I finish the grinder, we don’t have any mushed up apples to try. Sawdust and apples are both cellulose anyways, right? 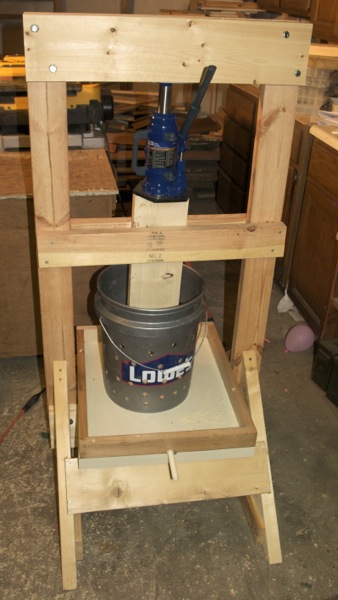 I also dismantled our old sewing table and attached some laminate counter top to it, which will become the apple grinder. Probably not until the weekend at the earliest, though.

Yesterday, Anya’s school celebrated the start of Fall with a big party. The kids got to throw corn, walk in corn, make cider, drink cider, make apple cake, eat apple cake, blow bubbles, and eat bubbles. The highlight of the event was a play about Demeter and Persephone that the school’s new drama teacher and the music teacher helped the students put together (in two weeks!). Some of the middle school kids wrote a few songs, the elementary kids choreographed a dance, and the little kids learned a dance about leaves (RED RED RED!). 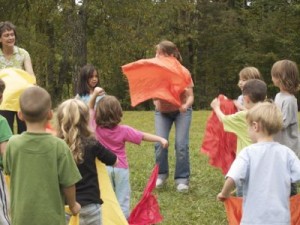 One of the teachers (who was a photographer in a previous life) borrowed my camera during the play. Alas, the camera battery wasn’t fully charged, so she was only able to get a few shots before darkness fell. The play was definitely the main event of the afternoon, and everyone loved it. I hope we get to have more celebrations like this one.

After the par-tay, Andy, Anya and I drove out to the house of Andy’s chiropractor’s office assistant. Andy was in for a sore neck last week, and he told about how sad we have been because our apple trees grew about three apples this year. The woman offered to let us pick apples from the four huge trees her family has in their yard. There are so many apples, she doesn’t know what to do with them all. By the time we got there, two other families had picked their fill, and the trees were still loaded. We drove away with about 230 pounds in the back of our car. 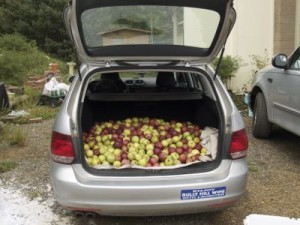 Andy really wants to make cider, but I won’t let him spend the money on a press. (I need to save the money for my fair projects!!!!) This weekend, I want to make apple butter (#65), apple jelly (64), and canned apples (21). I’d also like to (while I have all the canning stuff out) make some blackberry jelly (60), raspberry preserves (66), and possibly canned blackberries (22). The berries are all in the freezer from this summer. I’m not sure if frozen berries make bad jelly/preserves/jams. We’ll see how far I get before I collapse. Ooo, I also want to make apple sauce, and apple leather, and dried apple slices, and an apple pie, and some apple cake, and apple pancakes, and apple head dolls, and apple kebab, and apple pudding, and apple tarts, and apple pincushions, and apple skin yarn.

Today’s progress on #114 has been anti-progress. I realized I had done a whole whompin’ bunch of full stitches that were supposed to only be half stitches. I tried and tried to convince myself it would be fine, but, alas, I failed. I’ve spent quite a while this evening pulling those naughty stitches out. I will probably have to buy new floss in that color because I don’t think I’ll have enough now. I tried to pull the threads so that I could reuse them, but it was too messy where other colors had gone over/around/through.

Also, before lunch, Anya and I pulled out some craft foam sheets I bought months ago at the dollar store, and we are making a Halloween garland (161) I saw in a book from the library. All the pieces are cut out except some lettering I need black foam for, and I think I’ll be finishing this one up tomorrow…umm….after I finish all that canning. Or maybe not.

When we first got Anya’s playhouse, she couldn’t swing on her own unless she was on her tummy on the swing. One day, though, she figured out a method and a little chant to get her going. She would say and do, “Step by step, SWING!” Over, and over, and over. Now at the end of the summer, she is a real pro and has worn an impressive spot in the grass. Not only does she swing but she does tricks, “Momma! Look at my trick!” She points her toes on one foot and tucks the other foot back, or she swings at an angle, or she does a little wiggle. 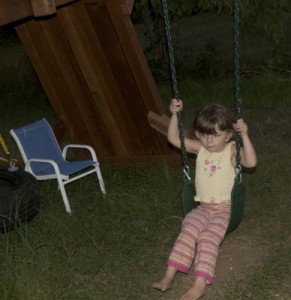 As summer comes to an end, the gardens are also finishing up. I remembered to get a few photos of the sunflower garden before it went kerput. (It’s now rather a mess.) This garden wasn’t quite what I (or the book I read) planned, but most of the seeds didn’t grow or were eaten, and the morning glories didn’t bloom until their weight pulled the taller plants to the ground. Still, it was fun, Anya got a kick out of it, the bees and birds were fed, and we will definitely try again next year. 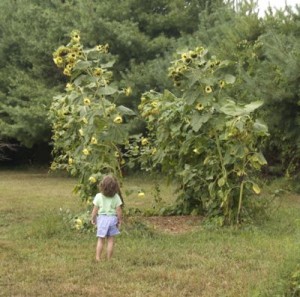 The cherry tomatoes (volunteers) went nuts, and we have a few gallons in the freezer. The chickens perhaps ate more of these than we have. Anya discovered the birds’ love for the tasty treats, and I had to watch her or she’d have fed them all to the girls. I was a bit concerned about the chickens overeating, but after a while they seemed to have enough and went in search of bugs. 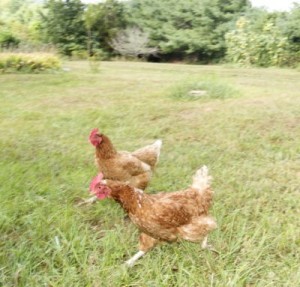 Alas, our bigger tomatoes didn’t do so well. We do have two vigorous plants still plugging along and toting HUGE tomatoes, but who knows if they will ripen in time. I got quite a few cucumbers, too, before the dry weather demolished them. A couple dozen tomatillos and some almost ripe Dragon Peppers round out the harvest for the summer. I wanted to plant fall crops, but I don’t think that is going to happen. We do want to plant garlic at least.

The blueberry wine Andy started at the beginning of the summer found its way into bottles this evening. I asked him if it was good and he said, “Yeah, I think so!” The blackberry wine is in the works. Or, rather, it is in a vat in the kitchen, and the place smells like sour fruit. (Or maybe that is the compost bin.) 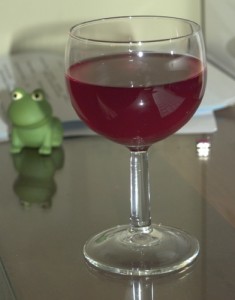 I keep thinking of things I want to write down and not forget, but then I forget: 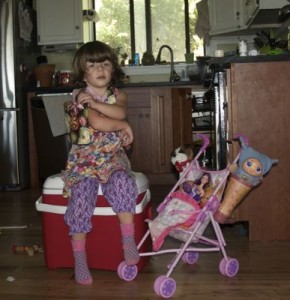 Summer is good, but it is almost over.

I’m starting to suspect that, when I didn’t wake up early this morning, Spam ate one of the other cats. 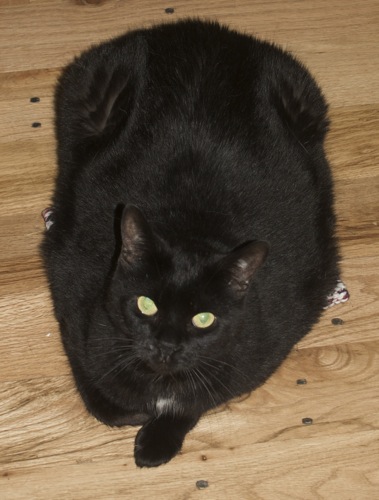