Ever since The Winter of Aquatic Death, I’ve been ignoring the aquarium. We are down to two tiny fish, a swarm of planaria, and some algae. Both the light bulbs burnt out several weeks ago. The water was a bit cloudy. I was even starting to use my secret mind powers (which I generally only use on dishes and laundry) to make the entire aquarium disappear. Anya told me she wanted to get some more fish, but I’m not going to put them into a home that resembles an underwater Dickinson orphanage. What do I do when things get messy? Clean Sweep ’em!

I couldn’t really take everything out of the tank and put it into piles, so instead I went to the pet store and bought new light bulbs. I am so wild and crazy. Even wilder and crazier than that? I didn’t leave the light bulbs in the car for two weeks. I didn’t let them get lost on the kitchen table for an entire season! Nope. I replaced the light bulbs right when I got home. I walked in the door, dropped my stuff on the floor, and changed those light bulbs! I really think I deserve a gold star for that alone, but it doesn’t stop there. Oh no, it does not.

After the tank was once again illuminated, I could see how much algae was growing on the sides, so I decided to scrub that off. Then I noticed all the flotsam dangling off the plastic plants and the princess castle. Those definitely needed to come out for a good washing. And heck, if I’m going to do that, why not break out the gravel sucker and suck up some muck? WOO! I really need to remember how much fun gravel muck sucking is because if I do, maybe I’d do it more often. It’s so much fun it’s sort of dangerous since I can easily get distracted by all the fun and suck up a fish or suck out so much water the fish end up flopping around on the gravel like in that horrible asthma commercial. Don’t worry. I managed to contain my fun adequately.

The aquarium is now beautiful and clean and tidy. I even rearranged the plants and other decorative items to give it a total Clean Sweep make over. The fish seem happy. I’m not so sure about the planaria, and I’m hoping the algae has suffered serious setbacks. But who cares about them? It’s time for more fish! 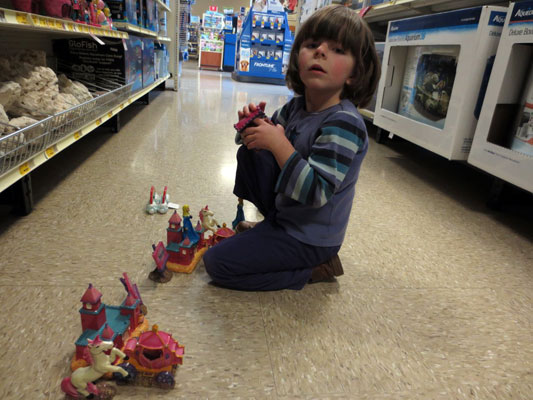 (Any store is a toy store when you are Anya.)