I checked and double checked, and this is indeed Kostya’s three month picture. I promise I didn’t just re-use his two month picture. From now on, I will try to put him in a different colored diaper each month to avoid suspicion. 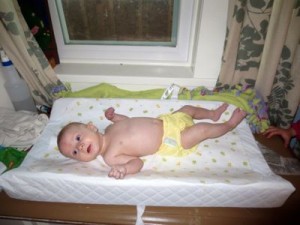 It’s a bit hard to write this third month list of tricks since his fourth month just wrapped up. What a bad scrapbook-type I am for getting a month behind. (On the other hand, being behind is pretty typical of the scrapbook type, so perhaps I am merely sticking true to form?)

– Became the master of his own noggin,
– Spoke his first words (according to Anya): hi, Carol, and I,
– Broke all our family diaper records with a score of five poo diapers in one day,
– Performed in his first musical, appearing as the Giggling Penquin, 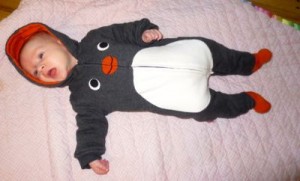 – Celebrated every occasion with the bubbly (drool that is),
– Expanded up to 11.5 pounds,
– Began waking up less during the night,
– Became indoctrinated into the scrapbook cult (is baby snot an archival-quality adhesive?), 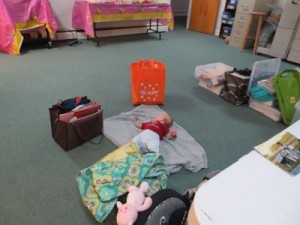 – Got his first job as the office pet as his sister’s school,
– Discovered the joy that is sucking on his hand and fingers,
– Began grabbing things like his blanket and pink kitty and my clothes and hair (ow),
– Found the perfect hair style: the cupie doll hair curl, and
– Performed in his second theatrical production: Monster Baby Is Going to Eat You. 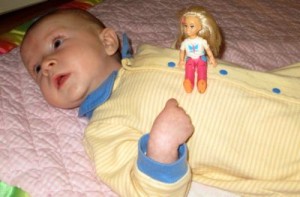 Anya saw Frozen, learned finger how to finger knit, forgot how to finger knit, started reading chapter books (filling in words she couldn’t read with “something” — “Jack and Annie something the something and something something cat!”), decided her favorite thing to say to her parents was “No Excuses!,” and finally got enough snow to use her Christmas sled. 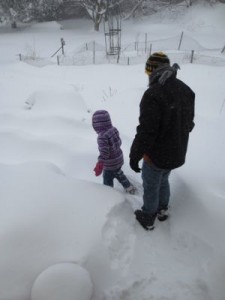 Carol went back to work, got a minivan, knitted and crocheted a wee bit, went to a crafty day, played in the snow, and late one night dumped a bowl of water in the middle of the bathroom floor because her brain didn’t think it was necessary to tell her hand to move the bowl over the sink first. 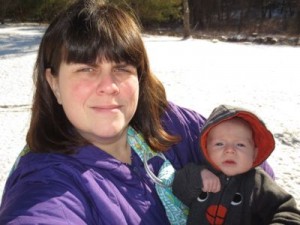 Andy still needs a hair cut, said goodbye to his VW, raked gravel, shoveled snow, and turned our driveway into a luge run. 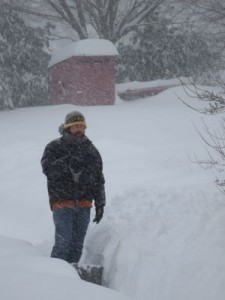 Up next… Four — It’s just like three, but bigger!

2 thoughts on “Third Month is the Charm”