Because, if you make something, and you don’t post it on the internet, what’s the point?

Though, I did post this on the internet, but it was on Ravelry, and not all of you three people who read this are Ravelry-ers, and I don’t want you to miss out on the awesomeness of these awesome things I made.

Buying the yarn and pattern book for these was my only real act of nesting. I started working on the project the day before Kostya was born. I even took it to the hospital to work on because I thought maybe there would be some boredom while I waited for him to be born. Helpful tip: although knitting or crocheting are great distractions when in the car with a crazy driver, these crafts are not the best at distracting one from contractions. I was able to get back to work on this project in those early weeks when I was baby furniture, but by the time I finished it, the outfit did not fit. (Watch out ye who next procreates. You may be seeing this again.) 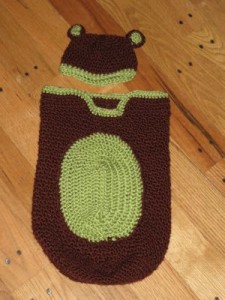 This was my last project before I popped. I saw these and just had to make them even though I knew the kid would probably never or hardly ever wear them what with babies and their joy in kicking off footwear. These booties were fun, fast, and pretty darn cute. I did have to go through several different yarns before I found one that seemed appropriately aquatic, but on the up side I now have some freaky green and white shag yarn. (Anyone know what to make with freaky green and white shag yarn?) 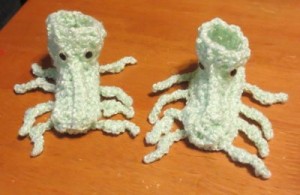 When my Mom was staying with us back in November, she was talking about wanting a light-weight hat to wear what with her being an old fart with hardly any hair. (I can say that because genetically speaking, it is quite likely one day I, too, will be an old fart with hardly any hair.) I found this pattern and poked around in my yarn stash and actually did swatches, which was good because the first two yarns were not right. The yarn I did end up using was purchased for me by my Mom at a yarn store in Tempe, Arizona, probably 8 years ago. At first I was worried about this hat because it looked very much like a bland sombrero, but in the end it got its act together. Mom says she likes it, but I haven’t seen her wear it yet. (Hint Hint!) I took this photo before I sent the hat out, and I was tired and cranky. (In other words, this is how I look most of the time right now.) 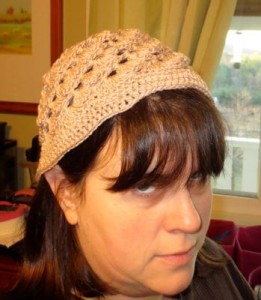 I haven’t made anything since the hat. I did start a pair of socks, but after about a month and a half I still haven’t even reached the heel of the first. I also began a market bag that currently resembles a slightly (slightly) over-sized coaster. Perhaps you’ll see these projects in finished format before summer?