It’s been a while, but I went to a crafty weekend a few weeks back. The second day I had a dire need for adhesive (“How can you need to buy more stuff? You have tons of stuff!” Andy asked. He obviously doesn’t understand adhesive.) I made a run to the craft store, and of course (since I was there ALL ALONE) I had to spend a few minutes or maybe thirty looking at EVERYTHING. It was nice to peruse, but I’m pleased to say the only thing I bought that was not adhesive was a two-pack of 8×8 scrapbooks on clearance for $3.

I thought about using the books to make some gifts, but then I figured maybe Anya would like one. When she saw it, she squealed. And then she claimed BOTH of them. I should not have been surprised. I let her use my funky scissors and gave her some old adhesive tab thingies I got from the free bin and pulled out my paper scrap bag and donated unused pictures from my last book. She worked on her “Crafty Book” for hours. Or at least maybe half an hour. It felt like hours to me. When she got her pages just right, she had her Daddy do the journaling for her, and I made the title for the front: “Crafty Book by Anya.” 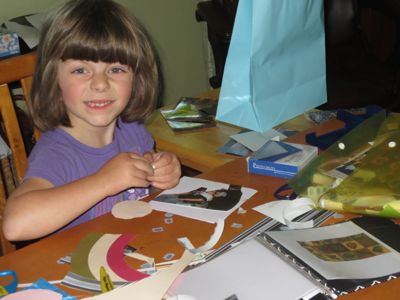 After she finished her book, she began assembling her “Crafty Bag.” Into a small tote bag she put the funky scissors, adhesive tabs, picture bits, extra book, some markers, some crayons, some colored pencils, part of an old calendar, and basically half of the contents of her until-then-mostly-organized craft bins.

Today I was talking to one of my crafty friends at lunch about a convention we are going to in August, and Anya demanded to go, too. I said no because I am the Mean Mommie, but it was sort of hard to say it because, dude, she has her own crafty bag!