For all of you pet people out there, here is a very important piece of advice: If you decide to adopt nine cats, be sure to stagger them by age. What I’m saying here is, avoid having nine cats who are all about the same age. It’s not a big deal in the beginning, but around the 14th or 15th year, all your cats start to die. 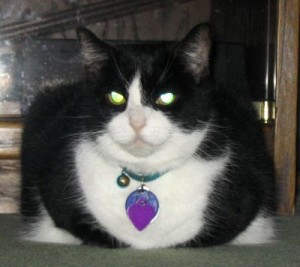 Larry was named Lawrence when we found him at the humane society. We changed his name to Larry. Sometimes Larry Boy, sometimes Larry Bear. My mom called him Larry Lightning Butt ’cause he had a white swoosh on his back side. (Much much much later, we found out he should have been named Lori.) We took Larry and Spam home at the same time (buy one get one free!) shortly after our kitten, Tama, died of FIP.

Larry was our only declawed cat, and I think that had an effect on him. He always seemed to be trying to make up for that by being a tough boy. Andy and I’d play a game with him where he’d flop on his back and bat at my hand (or Andy’s)…thwap thwap thwap….and he’d start to growl and snarl and try to bite. Sometimes I’d trick him a bit and tug on his tail. He’d flop around to defend that side of his body while I tickled his then defenseless tummy. Eventually this game would get him super riled up, and we’d have to run and hide from him and his pointy teeth. At heart though, Larry was a lover. He loved to snuggle and sit in laps. His little claw-less paw would tap-tap-tap on your leg when you sat at the computer or table. It was his way of asking if he could climb up and take a rest. 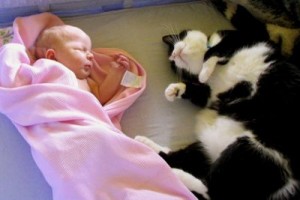 Larry and TreeFrog had a very interesting relationship. For most of their lives I thought they were like an old, cranky married couple, fighting and yowling one minute and snuggling and purring the next. When we found out Larry was really a girl, the conflict between the two seemed to make more sense as TreeFrog was always trying to be alpha female. Larry didn’t really seem to be close with any of the other cats. He was more of a people person. When he got smaller, Anya started picking him up and carrying him places. I think if the idea had ever occurred to her, Anya would have dressed Larry up in doll clothes and pushed him in a stroller. 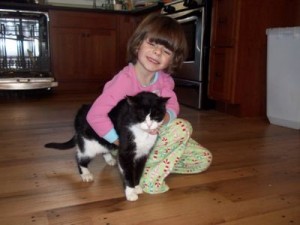 Larry loved to eat. He’d eat about anything and especially liked slurping up the milk Anya would leave in her cereal bowl. Larry wasn’t terribly graceful, but he was stealthy and quick and could nab a tasty tidbit off a plate in no time. Strangely, in the last year or so, no matter how much he ate he kept getting skinner. (Lab tests showed nothing really wrong.)

Last summer, I noticed something strange about Larry, and it took me a while to figure out his right pupil was totally dilated and not reacting to light. We did some googling and decided there wasn’t much that could be done whatever it was. The vet later confirmed this. When his eye went black and started to protrude, the vet agreed that it was most likely a tumor. Because Larry was so old and skinny and weak, he would not likely make it through surgery to remove the eye, so we decided to let things run their course. He got a little slower, the eye got grosser, and eventually we felt it was time to put him to sleep. It was a lot tougher making this decision with Larry than the others because the others had diminished so much from their normal selves…they were slow and tiny. But Larry was still Larry until the end.