Before I post another cat obituary (and yes, there will be another one very soon), I thought I’d catch everyone up on The Great Fair Obsession.

I don’t remember where the pattern came from, but it was something I found online somewhere. I enjoyed this pattern and learned a lot about crochet. I also learned the truth of dye lots and how my house is really dark. See, I ran out of yarn about 1/4 through the bonnet. I went to the store, picked up another ball, and took it home. Sure, it matched perfectly! After I was finished, I took the bonnet to the store with me to find ribbon to go with it, and the second I pulled the piece out of my purse there in the glow of the store lights POOF I could immediately tell where I’d started the new yarn. Oh well. I just have to enter; I don’t have to win. Plus, the fold of the hat sort of covers it up. 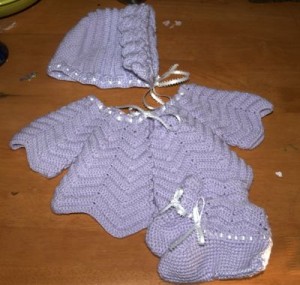 Have I mentioned lately that I don’t like cross stitch? It’s not as horrible as I thought before I started the Fair quest, but doing this beaded piece made me renew my dislike. I started off using too many strands, but I refused to acknowledge that early on when I could have done something about it. Instead I kept on going and ended up cranky the whole time I worked on it. Then came the beads. The pattern called for cream beads, but I couldn’t find any so I used gold. That’s fine except they were clear beads painted gold. How do I know? Because the gold paint rubbed off some of them. Oh, and my needle was too big to get the beads over it, so I de-threaded the needle, put the bead on, and re-threaded the needle over and over again. Yes, I could have bought a different needle, but I live in the boonies and I am lazy. 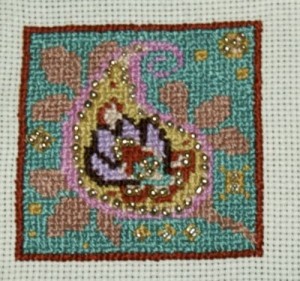 Crewel. I am working on a crewel project, I say. I have to pronounce it very distinctly: krewwwwww-ul. Crewel is to regular embroidery as whittling is to wood carving. At least to me. The difference between the two is teeny. With crewel (at least as far as I can tell) the difference is that you use wool thread instead of cotton or silk like other embroidery. I figured that the supplies would be something sort of hard to find, so I contacted a nearish needlework store (nope) and looked around online (some). Then one day I was in Michaels, and there was a kit, and then there was me with a 50% off coupon. Huzzah! I liked making this piece. Mostly. I was sort of annoyed by how the pattern had big areas painted on that I wasn’t supposed to stitch over. That seems like cheating. It looks sort of weird close up, too, but from afar it’s fine. Oh yeah, I learned how to do french knots. They are messy, but I can do them, the dreaded things.

What is a table linen, really? Surely a doily is a table linen in that it goes on the table and is linen-y. That is my story. I found a kit at the local sewing/craft store because, well, because I did. It was fun. Really fun. (Except for the part where I got one of the pieces slightly damp and the inked on pattern disappeared. Woops. Good thing there were three pieces in the kit.) This was (I think) my first experience with embroidery of any real sort, and it was like coloring with thread. I only did one type of stitch for the entire piece, but what’s my motto? “I only have to enter; I don’t have to win!”

A few months back, I bought an iron-on pattern with dancing tea pots and cups, but my craft cave swallowed it. Anya helped me pick out a new pack of patterns with kitties. I went a little cRaZy on this, my second embroidered piece. I used TWO different stitches. WoooHooo! Watch out! This piece was just as fun as the doily. After the fair is over, I want to go back and do all the other days of the week. Anya especially wants me to do Thursday. I’m not sure how durable the stitches are, though, so I’m not sure I would be able to bring myself to use the towels. 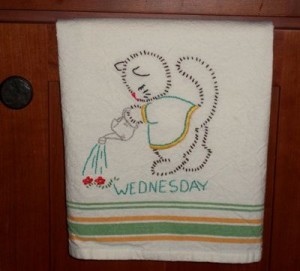 Welp, that’s all for now. I have a few things in progress, and the garden isn’t completely dead yet. Only a few more months to go. I’ve started wondering what I’m going to do when the fair is over.

2 thoughts on “A Word from our Sponsor”