Andy’s been bugging me for about two years now to make some more milk cozies. I’d only made two before moving on to something else, and we get four jars of milk each week. Those other two jars were always lonely and feeling neglected and sad. Sometimes, they got so depressed, the jars would jump and smash like Humpty Dumpty. Sploosh.

I ran out of circles to make yo-yos a few nights ago, so I was able to finally finish up Milk Cozy III. It sports a bottom to prevent smashing on concrete, and it has a sexy collar to add a bit of lactosey playfulness. 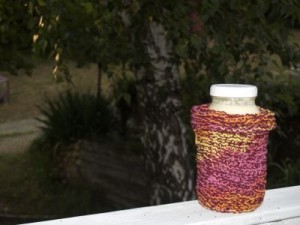 I received a care package today of more yo circles from Mom, so it may be a while before I do Milk Cozy IV. After that, who knows. Anyone want to buy some milk cozies?